Lassa fever (Lassa) is an acute viral hemorrhagic fever endemic to West Africa. Since its discovery in 1969 in the village of Lassa in Borno State, Nigeria, there have been countless outbreaks of various magnitude and severity across West Africa. It is estimated that many thousands of people are infected with the virus annually, with thousands of deaths. Case fatality rates in infected patients can reach more than 80%. These numbers, however, are only estimates, and in reality little is known about the true morbidity and mortality from this disease. Lassa is endemic to West Africa. Confirmed incidences have been recorded in Sierra Leone, Liberia, Guinea, Nigeria, Ivory Coast, Togo, and Mali. However, concerns exist that there may be Lassa (and Lassa-like) viruses in other countries such as Central African Republic, Burkina Faso, Ghana, Benin, and Cameroon – some of which have had sporadic cases.

Furthermore, Mastomys rodents are distributed across the African continent, indicating a strong possibility for the spread of the diseases, including Lassa, that they carry. 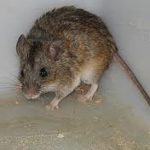 Humans contract the virus primarily through contact with the contaminated excreta of Mastomys natalensis rodents (commonly known as the Multimammate rat), which is the natural reservoir for the virus. Little is known regarding the transmission of the virus from the rodent reservoir to the human host, although there is compelling evidence that Arenaviruses are stable and infectious by the aerosol route in nonhuman primates. The rodents live in houses with humans and deposit excreta on floors, tables, beds and food. Consequently the virus is transmitted to humans through cuts and scratches, or inhaled via dust particles in the air. In some regions Mastomys rodents are also consumed as food.

Secondary human-to-human transmissions can also occur, although such scenarios are much rarer than rodent-caused infections. Historically, small-scale outbreaks caused by human-to-human transmissions have taken place, but mostly in hospital settings. When they do occur, these transmissions of the virus between humans happen through direct contact with infected blood or bodily secretions. This occurs mainly between individuals caring for sick patients although anyone who comes into close contact with a person carrying the virus is at risk of infection. Research by VHFC researchers suggest that infections caused by rodents account for more than 95% of Lassa patients.

People of all ages are susceptible to infection. Despite healthcare workers being at high risk of infection, contact in households with persons ill, or recently ill with Lassa, as well as sexual contact with someone convalescent with Lassa are all also important risk factors for human-to-human transmission. The disease is often mild or has no observable symptoms in up to 80% of people infected, but 20% develop a severe multisystem disease. Even after recovery, the virus can remain in body fluids for long periods of time, although this is poorly understood.

Lassa in pregnant women is especially severe and is associated with infection of the fetus and loss of the fetus or newborn in 90% of the cases. The risk of death is also significantly higher for pregnant mothers in the third trimester and evacuation of the uterus significantly improves the mother’s odds of survival.

Diagnosis and Symptoms of Lassa

In the early stages, Lassa is often misdiagnosed as influenza, malaria, or other common diseases, and as a result many patients fail to receive appropriate medical treatment. Making a correct diagnosis of Lassa is made difficult by the wide spectrum of clinical effects that manifest, ranging from asymptomatic to multi-organ system failure and death. The clinical presentation of Lassa usually begins with insidious progression of fever and general malaise that can progress to more severe symptoms within 1-2 weeks. Hepatitis (inflammation of the liver) is frequent and moderately severe in Lassa. Hemorrhaging, leukopenia and thrombocytopenia as well as neurologic signs are not quite as common in Lassa as compared to other hemorrhagic fevers such as Ebola and Marburg. Viral particles can be found in the blood of patients up to three weeks after the onset of infection and Lassa virus can be recovered from the urine for several weeks more.

Given the genetic diversity of the virus, Lassa diagnosis have been difficult for a long time. The developments of rapid diagnostic tools (RDTs), as well as PCR-, CRISPR-, and sequencing-based assays by VHFC investigators have made diagnoses much faster and accurate in recent years. Despite these advances, however, getting diagnostic tools into the communities most at need remains a challenge and is a key focus for the work performed by the VHFC.

Severe cases of Lassa are usually associated with multi organ complications with significantly raised levels of liver enzymes such as AST and ALT. The serum from these patients can turn brownish in color and a significant degree of hemolysis can be observed. While it is unknown what causes Lassa patients to succumb from the disease, doctors within the VHFC have consistently noted signs of acute kidney failure preceding fatal outcomes.

The antibody response is generally slow in infected patients and the presence of this can be detected by enzyme-linked immunosorbent assay (ELISA), lateral flow immunoassays (LFI), complement fixation, neutralization, and fluorescent antibody techniques. However, in Lassa survivors a long-lasting and vigorous production of antibodies occurs. Complement-fixing antibodies are short-lived, diminishing 5 to 12 months after disease onset. In contrast, neutralizing antibodies remain detectable for many years and can be found in many individuals across West Africa.

Cellular immunity mediated by CD8+ T cells is important for successful recovery for Lassa. Transfer of early-convalescent-phase antibodies does not appear to have a protective effect, whereas late antibodies neutralize the virus and are protective. Whilst the induction of the interferon response has shown some beneficial effect, in general, Arenaviruses are relatively resistant to the antiviral activity of these mediators. All evidence suggests that once Lassa has resolved in human patients, viral clearance is complete and chronic infection is not established. Reinfection with Lassa virus is possible, but data suggest that it may be uncommon.

No vaccine for Lassa is currently available for use in humans, and the only available drug, ribavirin, is only effective if administered early in infection (within the first 6 days after disease onset). One of the hallmarks of Lassa virus infection is the apparent absence of functional antibodies during acute infection. A fundamental understanding of the mechanisms of antibody-mediated neutralization of Lassa virus may have significant implications for the generation of antibody-based therapeutics or epitope-targeted vaccines.

Lassa virus is a member of the Arenaviridae family. Members of the virus families Arenaviridae (Lassa, Lujo, Junin, Guanarito and Machupo), Filoviridae (Ebola and Marburg), and Bunyaviridae (Rift Valley Fever and Crimean Congo hemorrhagic fever) are the agents of greatest concern to public health and bioterrorism.

The Lassa virus particle is round, oval, or pleomorphic, 110 to 130 nm in diameter, and enveloped. Its genome consists of two single-stranded RNA segment – the large L segment and the small S segment. The large segment encodes the viral polymerase and zinc binding protein and the small segment encodes the structural proteins – nucleoprotein and glycoprotein precursor. The expression levels of the L and S segments differ significantly, with much more S segment being produced during infection. 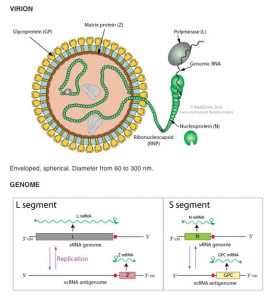 The viral envelope is acquired when new particles bud off through the host cell plasma membrane and it carries club-shaped surface projections that are about 10 nm long. Sandy-appearing granules (“Arena” is the Latin root meaning sand) resembling ribosomes are believed to be found within the unstructured interior of new viruses. However, these RNAs do not seem to have a required role in virus replication and work by VHFC investigators has shed doubt on whether these sandy granules are indeed host ribosomes.

Lassa viral RNA is present in two distinct segments, designated L and S. The RNAs of Lassa and other arenaviruses are “ambisense”, as is the case for members of one genus of the Bunyaviridae. In these viruses, the 3′ half of the genome is of negative polarity and the 5′ half is positive. This results in some viral proteins being encoded in subgenomic, virus-complementary mRNA species, whereas other proteins are encoded in subgenomic, virus-sense mRNA sequences. The ambisense strategy of replication is relatively rare amongst viruses and is shared by all members of the arenavirus family.

Very little is known about the replication and life-cycle of Lassa virus. Most of what we know, come from studies using the prototypical, but mostly non-pathogenic Lymphocytic choriomeningitis virus (LCMV). The virus replicates in a wide variety cell types (believed to be primarily dendritic cells) after having entered the cell via its receptor alpha-dystroglycan (DAG1). Interestingly, a gene LARGE that modifies DAG1 and is required for Lassa viral entry was discovered by VHFC researchers to be under positive selection in the West African population. This means that over evolutionary time, certain populations may have responded to the severity of Lassa by developing a degree of genetic resistance to Lassa virus infection.

After cellular entry, replication and transcription of the viral genome occurs in the cytoplasm. The S segment of the viral genome encodes in the negative sense a nucleoprotein (NP), and in the positive sense a precursor glycoprotein (GPC), which is later cleaved into two structural glycoproteins (GP1 and GP2). The L segment encodes in the negative sense an RNA-dependent RNA polymerase (L), and in the positive sense a zinc-binding protein (Z) that binds to the viral replication complex. Upon completion of replication the virus buds from the plasma membrane, incorporating host lipids into the viral membrane.

Genomic Analysis of Lassa Virus during an Increase in Cases in Nigeria in 2018
New England Journal of Medicine, 2018